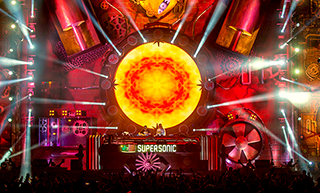 National, October 3, 2016: Vh1 Supersonic, one of the biggest dance music festivals in India is all set to unite all music lovers this February! Enhancing the party flavor amongst youngsters, LIVE Viacom18 has announced a strategic decision to host the fourth edition of its biggest live property in Pune. In order to move closer to its viewers, Vh1 Supersonic has announced to shift its venue to the Oxford of the East, Pune. Calling out all dance music lovers to the city of dynamism, heritage and modernity, the three day long festival is scheduled to take place on February 10, 11, and 12 in Pune. Vh1 Supersonic has earlier hosted Vh1 Supersonic Arcades in Pune, with headliners by Above & Beyond, Dash Berlin and Pretty Lights, to name a few, and has consistently received an overwhelming response. Known as ‘Oxford of the East’, given its focus on academics and the number of colleges affiliated with Pune University, the city exudes a vibe of being one large college campus. Being the cultural capital of Maharashtra, Pune has always had an intrinsic connection with theatre, music, arts and literature and been a centre of learning and research in all fields. The multicultural and cosmopolitan environment of the city facilitates understanding and appreciation of other cultures. The city also boasts of a rich infrastructure that supports commute from metros across India, thereby making travel convenient for outstation attendees.

Commenting on the shift in venue, Saugato Bhowmik, Head, LIVE Viacom18, said, “Carrying a legacy of offering the best in dance music, we are excited to host the upcoming edition of Vh1 Supersonic in Pune. Deeply-rooted in culture and traditions, the city is known for its openness towards modern influences and thought. Pune is a seamless blend of local culture and global influences, thereby making it an apt destination for the upcoming edition of Vh1 Supersonic! We also see this as an ongoing journey to provide transformative experiences to today’s youth by creating the Supersonic world at the kind of world-class destinations that Pune is providing to us. We are looking forward to a very successful Vh1 Supersonic, celebrating Pune as our new home.”Party-goers can enjoy a gamut of experiential activities beyond the mammoth artist line-up across the three days of Vh1 Supersonic. They can lose themselves in numerous hangout zones, filled with fun and adventurous activities, weave through engaging art installations, shop till they drop at flee markets and a lot more! The music festival that has brought to India some of the greats from the international world of EDM such as Skrillex, Axwell, Zedd, W&W, Steve Aoki Paul Van Dyk, Above & Beyond, The Chainsmokers, Dash Berlin and many more, is excited to move closer to its followers. Moving beyond just three days annual festival, Vh1 Supersonic is also popular for its year long-experience sets through multiple brand extensions; i.e.Vh1 Supersonic Club Nights, Vh1 Supersonic Arcades. This enables fans to engage with their favorite artists in their city though the year. After three successful editions of one of India’s biggest Dance Music festivals, LIVE Viacom18 is back with Vh1 Supersonic, this time, with a new address. Gear up, as the youth capital of India turns into the nation’s ‘party capital’ with the fourth edition of Vh1 Supersonic!

About LIVE Viacom18
Live Viacom18 is a is a wholly owned subsidiary of Viacom18 Media Pvt. Ltd. Live Viacom18 was set up with a strategic objective of growing International entertainment and its consumption on all platforms : Live, Television,
Mobile and Online. Live Viacom18 focuses on building IP’s in all genres of Music (EDM, Rock, Pop and Jazz) and
Entertainment (Comedy and theatre shows). LIVE Viacom18 has built more than 12 large format IPs across categories over the last few years and is uniquely positioned to build a 360 degree promotional and fan base built up ecosystem. Live Viacom18 has a strong technology business called Spotlight which has direct partnerships with
all leading telecom and handset operators in India which give its access to 900 million touch points for pushing
consumption of music, varied form of content and music from the live events and Artists bytes and trivia. LIVE Viacom18 engages with millions of consumers through impactful large format live properties such as Vh1 SUPERSONIC MTV VMAI, Nickelodeon KCA, Emerge, MTV Xtreme, and Comedy Central Chuckle Festival amongst others.