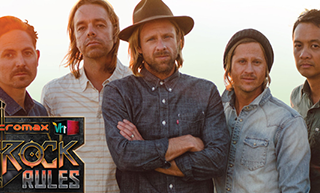 National, March 9: This March, Vh1 is all set to bring international alt-rock sensation Switchfoot to India with Micromax Vh1 Rock Rules! This tour marks the debut performance of the California-based, Grammy award-winning band in India. Alt-Rock fans will get a chance to witness their favorite band perform LIVE in India in Mumbai, Pune and Gurgaon at Hard Rock Café on 25th, 27th and 29th March respectively.

After the release of the impressive nine studio albums and becoming one of the most well-known rock bands in the world, Switchfoot is geared up to finally take Indian fans down a nostalgic lane with their three-city tour. Being their maiden trip to India, Switchfoot will entertain their fans with the best hits of their eighteen successful years.

Ferzad Palia, EVP & Head – English Entertainment, Viacom18 says, “Switchfoot has created a rage amongst the Indian audience with their super-hit tracks and albums for several years. We are immensely delighted to present the band’s maiden tour in India through Micromax Vh1 Rock Rules.”

“I had the chance to visit India on my own a few years back, and it blew my mind. Ever since, I’ve been begging for the chance to bring my bandmates back with me to play some shows. We can’t wait to bring these songs to India!” – Jon Foreman, Switchfoot

Switchfoot became a sensation with their popular tracks in ‘A Walk To Remember’. The band then commenced their journey to success with hit singles such as ‘We are One Tonight’, ‘Need To Live’ to name a few. The band comprises of singer/songwriter Jon Foreman, his younger brother (and co-writer) Tim Foreman on bass, drummer Chad Butler and multi-instrumentalist Jerome Fontamillas. Their tracks have also been an integral part of renowned TV series Dawson’s Creek, Party of Five and Felicity. Their super hit single, ‘This is Home’ has also been featured in The Chronicles of Narnia: Prince Caspian.

Vh1 is India’s only 24-hour International entertainment channel that provides viewers with their daily dose of International music, Hollywood, Pop culture and Lifestyle. Vh1 is a part of Viacom 18, a 50 – 50 joint venture between Viacom & TV 18. Since its inception in January 2005, Vh1 has grown tremendously reaching over 75 million people in India. Vh1 India has grown the English music audience by 180% in the last 5 years alone. The channel has pioneered the heady combination of programming content and live on ground activities. Vh1 has been committed to bringing to Indian audiences the best of international music genres like EDM, punk, rock, reggae, hip hop, pop, jazz etc. Through their international properties like ‘Rock Rules’, ‘Jazz Masters’, ‘Hip-Hop Hustle’ & ‘Handpicked’ Vh1 has successfully brought down, artists such as  Anoushka Shankar, Wyclef Jean, KardinalOffishall, Mobb Deep, Flipsyde, Jazz legend Herbie Hancock & chart topper Simon Webbe. From 2011, Vh1 India also secured a multi-year deal for Music’s Biggest Event – The Grammys. This deal has spearheaded Vh1 as the No.1 viewing destination for the youth in the English entertainment and lifestyle space. Globally, Vh1 is available across 148 million households in over 124 countries/territories.