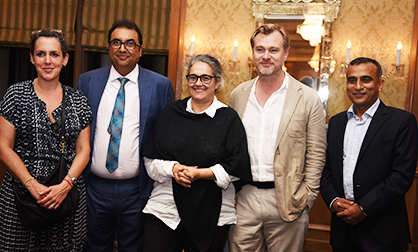 Mumbai, 31st March, 2018: A one of a kind crowd gathered at Mumbai’s Taj Mahal Palace yesterday to celebrate, encourage and save the art of film-making on celluloid. Acclaimed Director Christopher Nolan and award-winning visual artist Tacita Dean are in the city for the 4th edition of Reframing the Future of Film. Hosted by India’s youngest full-play media network Viacom18, in association with the Film Heritage Foundation, in attendance for the dinner were a motley of top business leaders, film-makers and media industry personalities such as Kamal Haasan, A.R. Rahman, Huma Qureshi, Anurag Kashyap, Siddharth Roy Kapur, Rajkumar Hirani, Santosh Sivan, Shyam Benegal, Ashish Bhasin, Vikram Sakhuja, and Prasoon Joshi amongst others in attendance.

Speaking at this exclusive dinner party, host for the evening Sudhanshu Vats, Group CEO, Viacom18, said: “Films in India have traditionally been shot on celluloid, an art that is fast being replaced by digital filming. Christopher Nolan is one of the world’s most eminent film-makers who still shoots on film and is a strong proponent of saving celluloid filming. As supporters of film preservation and restoration initiatives in the Indian subcontinent for 4 years now, we understand the importance of saving cinema in every medium, be it digital or analogue i.e. celluloid. Having Christopher and Tacita in the city is a great opportunity for raising awareness and I would urge corporations, media, partners and the entertainment industry of the country to support this cause.”

Christopher Nolan and Tacita Dean have been raising awareness amongst the international film fraternity towards the cause of saving celluloid. After three editions in London, Los Angeles and Mexico, this time they’re in India, the second largest film making nation in the world. Film Heritage Foundation, which works towards the saving and restoring the film heritage of India and neighbouring countries has partnered with Nolan and Dean to raise awareness in India about film being a working medium, with unique intrinsic qualities that artists and filmmakers need.

Speaking about his visit to India Christopher Nolan said: “It’s been wonderful meeting so many of you. Here’s to learning more from you guys, to looking forward to events over the next couple of days, and learning more about the amazing film culture that exists in India.”

Shivendra Singh Dungarpur, Founder Director, Film Heritage Foundation said, “Partnering with stalwarts of film-making such as Christopher Nolan and Tacita Dean bring about awareness and attention that is most lacking in the cause of film preservation and restoration. Most of our cinematic heritage is in celluloid and therefore, its preservation will help not only save films but also film-making on film.”