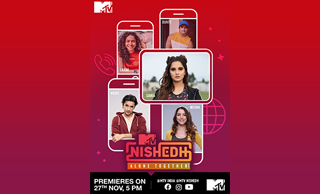 Mumbai, 24th November 2020: After witnessing the ground-breaking performance of Phase 1 of the MTV Nishedh campaign that reached over 10 Mn + people across India, Viacom18 and MTV Staying Alive Foundation, supported by an educational grant from Johnson & Johnson Services, Inc., are all set to bring back a digital-only miniseries MTV Nishedh Alone Together.
The outbreak of the COVID-19 pandemic has caused new challenges for those suffering from Tuberculosis (TB) across India. Not only may TB patients and survivors face unique vulnerabilities to severe COVID-19 infection as a result of their respiratory challenges, but the pandemic has made it more challenging for them to access both medical care and social support.

Mumbai, 24th November 2020: After witnessing the ground-breaking performance of Phase 1 of the MTV Nishedh campaign that reached over 10 Mn + people across India, Viacom18 and MTV Staying Alive Foundation, supported by an educational grant from Johnson & Johnson Services, Inc., are all set to bring back a digital-only miniseries MTV Nishedh Alone Together.
The outbreak of the COVID-19 pandemic has caused new challenges for those suffering from Tuberculosis (TB) across India. Not only may TB patients and survivors face unique vulnerabilities to severe COVID-19 infection as a result of their respiratory challenges, but the pandemic has made it more challenging for them to access both medical care and social support.

To combat this, MTV Nishedh Alone Together will focus on raising awareness about TB in India among young people – who represent just under 40% of all new TB cases – while stressing the importance of seeking proper diagnosis and care, especially amidst the COVID-19 pandemic. The 5-episode mini-series will stream on YouTube, Instagram and Facebook handles of MTV India and MTV Nishedh, starting every Friday, from 27th November 2020 onwards.

A digital only spin-off of MTV Nishedh, which premiered in January this year, MTV Nishedh Alone Together will see renowned sports person Sania Mirza champion this important social cause and make her digital debut on the mini-series. The tennis star will be seen playing herself on the show, talking about the challenges faced by people during the pandemic, including those who have TB. Sania joins the cast with returning actors, including Priya Chauhan, Syed Raza Ahmed, Himika Bose and Akshay Nalawade, who will also be seen in pivotal roles in the series.

Speaking about the campaign, Viacom18 Spokesperson said: “We believe that meaningful content, when delivered in an entertaining format to mass audiences, can go a long way in driving instrumental impact. Amidst the COVID-19 pandemic, health and wellbeing has taken forefront in our lives; however, we still choose to shy away from conversing about TB – the world’s leading infectious killer. A global modelling study has suggested that, with every month of the lockdown, TB is expected to claim an additional ~70,000 deaths in India during 2020-2025.  Thus, the timing couldn’t be more appropriate to engage our audience through entertainment on social media to create awareness of TB in the times of COVID.”

The MTV Nishedh campaign started in 2019 as a holistic 360-degree mass-media led intervention focussed towards increasing awareness on taboo topics facing young people in India, including TB, with support from Johnson & Johnson Services Inc., as well as other issues like sexual and reproductive health, adolescent malnutrition, women’s empowerment and consent. The campaign included MTV Nishedh, a 13-part fiction TV series on MTV; a radio drama on Red FM; and a sustained social media outreach to encourage conversations around these taboos.

Georgia Arnold, Executive Director of the MTV Staying Alive Foundation stated, “MTV Nishedh saw positive results in sparking conversations around taboo topics including tuberculosis and the stigma around it. Through MTV Nishedh Alone Together, the aim is to continue this conversation and more importantly help those who may be suffering from symptoms of TB to ensure that they know where to go to get tested, and to continue accessing their meds during the pandemic.  We want people to know that there is always help available for them and they should never give up on themselves, no matter how dark the times may seem.”

“COVID-19 has caused significant disruptions in care for patients with tuberculosis (TB) and drug-resistant tuberculosis (DR-TB) in India and around the world. We urgently need to step up our collective efforts to raise awareness about the disease and help ensure those impacted receive the care and social support they need during these challenging times,” said Sarthak Ranade, Managing Director, Janssen India, Johnson & Johnson Private Limited. “Johnson & Johnson has long been a committed partner in India’s fight against TB — and now is no different. Building on our work over the years with the Government of India, NGOs and other partners, we are proud to collaborate with the MTV Staying Alive Foundation on this important campaign, which we hope will help encourage and empower young people to advocate for a TB-free India.“

Supporting MTV Nishedh Alone Together as a Cause Ambassador, Sania Mirza said, “In India, one person dies of TB, almost every minute. This alarming figure strongly reflects the negligence around the disease and was reason enough for me to associate with MTV Nishedh Alone Together. The current COVID-19 pandemic has seriously disrupted TB diagnosis and treatment services in India.  Just under 40% of diagnosed TB cases occur in people under the age of 30, which means this disease impacts a significant chunk of India’s young population. As an action-oriented generation, it is thus imperative for them to take charge of smashing stereotypes and normalise conversations around TB in India. The show is a perfect platform to echo this and I hope my participation helps in influencing perceptions in these trying times.”

A completely shot-at home series, MTV Nishedh Alone Together captures the journey of a young couple, Vicky and Megha, based in Mumbai, who brave it through the professional challenges amidst the imposed lockdown, coupled with the concerns around Vicky’s TB treatment continuation in the COVID-19 scenario. Faced with this adversity, will Megha and Vicky be able to stick together? Will Vicky receive the care and social support he needs during COVID-19? MTV Nishedh Alone Together has the answers to these questions and much more.

With over 2.7 million cases annually, India is home to the highest number of TB (Tuberculosis) patients in the world, out of which at least half a million cases go undiagnosed. The purpose of this initiative is to help raise awareness about the disease and reduce the stigma that is too often associated with it. Viacom18 as a network identifies itself as a ‘Network with a Humane Purpose’ and with MTV Nishedh as a holistic campaign has been able to prove the undaunting soft power of the entertainment industry.

Ab Koi Nishedh Nahi, it’s time to #KhulKeBol on TB and more. So, stay tuned to the YouTube, Facebook and Instagram handles of MTV India and the YouTube channel of MTV Staying Alive Foundation, every Thursday starting 27th November and be a part of this change.

MTV, the world’s premier youth brand, is a dynamic and vibrant blend of music and pop culture. With a global reach of more than half-billion households, MTV is a cultural home to the millennial generation, music fans, and artists.  50 MN fans following MTV across show pages on social media have made it one of the top brands in social influence as well. MTV consumer products are available across 35+ unique categories through strategic brand licensing tie-ups, leading to combined retail sales of 100+ crores present across all key online and off-line channels of distribution. MTV has a buzzing MTV Live business with properties like MTV Video Music Awards and MTV Bollyland. Aiming to entertain, lead and collaborate with young people through its evocative communication and youth relevant shows like Hustle, Roadies, Splitsvilla, Coke Studio@MTV, MTV Unplugged, MTV Girls on Top, MTV Love School and keep them engaged through various cause led initiatives such as MTV Rock the Vote and MTV The Junkyard Project. For information about MTV in India, visit www.mtv.in.com

The MTV Staying Alive Foundation (MTV SAF) is an independent charity that produces ground-breaking, original media content that delivers vital HIV and sexual and reproductive health messaging to a global audience. We are linked to Viacom CBS International Media Networks (and Viacom 18) through the in-kind support they give as well as the use of the MTV brand. All our content is distributed rights-cleared and cost-free, enabling us to reach the widest audience possible.

Viacom18 Media Pvt. Ltd. is one of India’s fastest-growing entertainment networks and a house of iconic brands that offers multi-platform, multi-generational and multicultural brand experiences. A joint venture of TV18, which owns 51%, and ViacomCBS, with a 49% stake, Viacom18 defines entertainment in India by touching the lives of people through its properties on-air, online, on-ground, in-shop and through cinema.