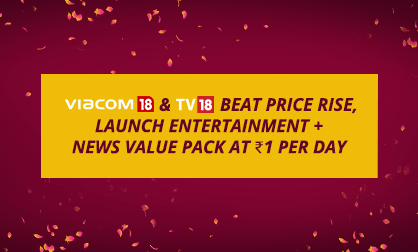 ~ For India’s complete family entertainment + news needs with the ‘COLORS wala pack’ now at Re. 1 per day

Mumbai, December 24, 2018: In the times we live in, the thing we often wonder about is what can a Re. 1 coin buy us? India’s foremost networks – Viacom18 and TV18 – have joined hands to address this issue of price rise as they launched their Value Pack, comprising the top channels across genres, at Re. 1 per day! In a country where entertainment is the fourth basic need in addition to roti, kapda and makaan, Viacom18 and TV18 has the nation covered in that.

The Telecom Regulatory Authority of India had recently mandated a new tariff regime that is to come into effect December 29, 2018. The TRAI tariff order is aimed at empowering the consumers to select channels of their choice and also aims at bringing in transparency across the entire broadcast ecosystem.

“TRAI’s new tariff order is a pioneering move that will benefit all players across the broadcast value chain. Consumers will now have the choice to select the channels of their choice, broadcasters can see greater transparency in the value chain with under-reporting getting curtailed and distributors stand to benefit from the commissions and incentives they will earn. After the DAS implementation, this mandate will go a long way in bringing equity into the industry,” said Sudhanshu Vats, Group CEO & Managing Director, Viacom18.

Explaining the company’s pricing and consumer connect strategy, he further added “If you thought that the one-rupee coin in your wallet has no value, think-again as Viacom18 and TV18 are all set to bring your family’s daily entertainment needs just for Re. 1. Being home to the most loved and viewed channels in the country, our bouquet pricing will ensure that our viewers truly get the best of news, general entertainment (Hindi and Regional), kids entertainment, youth and English entertainment, music, infotainment and movies for every family member at only Re. 1 a day. ‘The COLORS wala Pack’ is the most comprehensive pack and at a price point that keeps the budgetary concerns of our viewers in mind. After roti, kapda, makaan, entertainment is India’s 4th basic need and being the country’s fastest growing network, it is our constant endeavor to keep that need affordable.”

Speaking about the new tariff regime, Rahul Joshi, MD, Network18 said, “The new tariff order is a transparent and consumer-focussed regulation that gives freedom and choice to the end user. At a network level we remain committed to create quality entertainment and news content and firmly believe that in the new pricing regime, we will be the go-to network that best caters to content needs across demographics and geographies.”

Adding to Vats’ and Joshi’s views, Anuj Gandhi, Group CEO, IndiaCast said, “We have created economical & competitive bouquets to bring the best value for money for an Indian household. India is a diverse market with multiple needs for entertainment in a family. Our channels have presence across a wide range of genres such as GECs, Kids, News, Infotainment etc that puts us in the best position to deliver entertainment for subscribers & earning potential for service providers. Furthermore, we are confident that TRAI shall work to put the Quality of Service Regulations into effective implementation so that transparency is achieved across the value chain in benefit of all stakeholders.”

Viacom18 and TV18 have launched a multi-media marketing campaign, titled ‘Ek Me Hai More Yahaan, that advocates the comprehensive value for money that the ‘COLORS wala Pack’ provides to the Indian viewers. The campaign highlights the clear and present concern of Indians over the rising costs of entertainment and packages top channels across genres so that the entire entertainment and news needs of an Indian family are taken care of. It also defines the strategy of the networks wherein all the bouquets across Hindi, English and Regional entertainment and news are packaged in a manner to help the viewers keep their monthly budgets at a minimum.

The Ek Mein Hai More Yahaan campaign will be driven by the most prominent faces seen on Indian television such as Rohit Shetty, Neha Dhupia, Malaika Arora, Mahesh Manjrekar, Arya, and a galaxy of celebrities from Viacom18’s stable, educating the audience of all the entertainment and news that they can avail at INR 1 per day.

With a sound understanding of the viewer preferences, Viacom18 and TV18’s distribution arm IndiaCast has bundled the networks’ offerings in Budget, Value and Family packs to cater to the needs of different viewers. With a total of 57 channels (42 SD and 15 HD), the Viacom18 and TV18 networks’ channels will be available on a-la-carte basis. The networks have also introduced 10 channel bundles, in SD and HD versions, mapped to its markets (Hindi, North East, Kerala, Karnataka, Gujarat, Bengal, Maharashtra, Orissa, Telegu & Tamil) to allow the consumer to choose from.

(All prices are exclusive of applicable Govt. taxes)

TV18 has also forayed into the Indian factual entertainment space through A+E Networks | TV18 (a joint venture between A+E Networks and TV18 Broadcast) and operates The History Channel and FYI TV18.