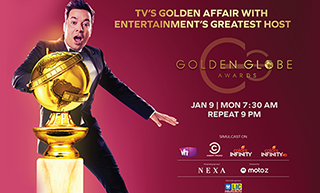 Catch the simulcast of the 74th Golden Globe Awards straight from Beverly Hills on Vh1, COLORS INFINITY, and Comedy Central on Monday, 9th January, 7:30 AM onwards with a primetime repeat at 9 PM.

National, 5th January 2017: Watch the finest from the American TV & Film industry collectively hold their breath, as they compete for the most coveted awards in the business, the Golden Globe Awards. Catch some overwhelmingly impressive, power-packed performances of the night on channels across English Entertainment cluster under Viacom18’s banner.

This year, in the films category, La La Land is leading the pack with seven nominations, Moonlight follows soon after, scoring six, trailed by Manchester by the Sea with five nods. While the TV category is, unsurprisingly, dominated by The People vs. O.J. Simpson: American Crime Story, there are a few additions to the list, of shows that premiered this year like This Is Us, Westworld and Stranger Things.

The awards will be compered by the host of The Tonight Show, Jimmy Fallon, following the legacy of Ricky Gervais, Amy Poehler, and Tina Fey.

Commenting on the simulcast of Golden Globe Awards, Hashim D’Souza, Programming Head – English Entertainment, Viacom18 shared, “We are thrilled to kick start this year with one of the most prestigious awards, airing simultaneously across all our English Entertainment channels. This ecstatic mix of lauded TV shows, movies, and music, makes the Golden Globe Awards so exciting that we take immense pleasure in bringing this to our viewers, year on year.”

Catch the best of TV and films, as they fight for one of the most significant awards, Golden Globe Awards, on Monday, 9th January only on Vh1, COLORS INFINITY, and Comedy Central.

About Viacom18:
Viacom18 Media Pvt. Ltd. is one of India’s fastest growing entertainment networks and a house of iconic brands that offers multi-platform, multi-generational and multicultural brand experiences. A joint venture of Viacom Inc. and the Network18 Group, Viacom18 defines entertainment in India by touching the lives of people through its properties on-air, online, on ground, in the shop, and through cinema.