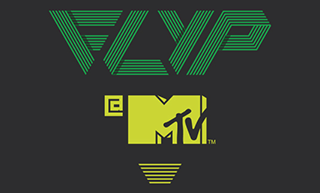 ~To launch the first café in New Delhi, followed by 10 cafes across India in the next 5 years~

~FLYP@MTV to operate on the exciting concept of WORK.CHILL. PLAY~

Mumbai, 24th November 2015: Viacom18 Consumer Products, the consumer products arm of Viacom18, is all set to extend the iconic youth brand MTV, from broadcast and digital space to an always on on-ground experience by introducing the first ever café – FLYP@MTV in association with Funbars Hospitality Pvt. Ltd, the master licensee that conceptualizes, develops, executes and operates India’s one of its kind urban hospitality experience. FLYP@MTV will make its debut globally by opening in New Delhi in the month of December. Following the first café in New Delhi, Viacom18 Consumer Products and Funbars Hospitality Pvt. Ltd. plan to open 10 more cafes in the next five years beginning with Mumbai and Bangalore.

FLYP@MTV promises to provide patrons the opportunity to actually experience MTV in its entirety and interact with it through engaging touch points at the café, specially curated entertainment and an exclusive menu created by celebrity chef Ranveer Brar. FLYP@MTV is an authentic representation of the independent professionals, free thinkers, creative minds: a progressive destination to WORK. CHILL. PLAY. A unique facet of the café is its nature of being an exclusive place to work during the day and transforming into a place to chill in the evening and a play zone at night. The café is consistent with MTV’s DNA of being fun, irreverent and entertaining. There is something for everyone at this one of its kind new MTV hangout.

Speaking on exploring this space Sudhanshu Vats, Group CEO, Viacom18 says, “Viacom18 believes in creation of ecosystems – we identify the opportunity for creating tangible touch points for our consumers through live events, through online offerings and through consumer products where we exist in over 50 categories. A café is yet another ecosystem that we, in partnership with Funbars, are creating as an extension of our iconic youth brand MTV. The launch of FLYP@MTV is a move that further strengthens Viacom18’s bouquet of varied offerings – making us truly unique. Thus for us, FLYP@MTV is about creating an interactive and engaging atmosphere wherein youngsters can interact to work, socialize and party together. The café will continue to set and fuel trends, just the way MTV does, therefore creating a gateway to new experiences for our young consumers.”

Announcing the launch of the brand Saugato Bhowmik, Senior Vice-President, Consumer Products, Viacom 18 Media Pvt. Ltd. said, “Our extensive bouquet of consumer products that covers everything from MTV themed accessories to gadgets to apparel to deodorants – we are now extending this iconic brand to create an always on on-ground offering which will let our consumers experience MTV in all its glory. FLYP@MTV is the beginning of a brand new chapter in the journey of MTV consumer products and we have found the perfect partners in Funbars Hospitality Pvt. Ltd. to create this experience and make it come alive. We are so excited about leading the change…so here is a big shout to everyone to come hang out with us at FLYP@MTV for an endless enjoyable experience.”

Viraj Lamba, Head of Business Division & Co-Promoter, Funbars Hospitality Pvt. Ltd. adds, “FLYP is an initiative by Funbars & MTV that aims to give the new urban youth a significant interaction with the brand. Tapping into the pulsating, dynamic and fresh youth culture, FLYP@MTV is designed to bring together the vibrant potential of young India. Each element in the café gets its inspiration from various themes associated with MTV. Our aim is to make FLYP@MTV a cult hangout destination across the country. With exclusively designed entertainment, a bespoke menu by celebrity chef Ranveer Brar and engaging touch points using cutting edge technology, FLYP@MTV is sure to capture the attention of the youth across the nation.”

What’s in store for you at FLYP@MTV?

FROM SIT DOWN EXPERIENCE TO STAND-UP COMEDY
FROM JAMMING ON IDEAS TO JAMMING ON STAGE
FROM START-UPS TO PISS-UPS
FROM BRAINSTORMS TO BRAIN-FREEZE
FROM RESOURCING TO REFUELLING
FROM BULLISH IDEAS TO BAKRA PRANKS
FROM GIGS TO GAGS
FROM BOTTOM-LINES TO BOTTOMS-UP
FROM ACRUALS TO ACAPELLA
FROM KRA’S TO EDM
FROM NET WORTH TO NETWORKING
FROM SWAPPING SKILLS TO SKULLING SHOTS
FROM PROGRESS REPORTS TO PROGRESSIVE ROCK
FROM WORKING TO TWERKING
FROM PERFORMANCE REPORTS TO PERFORMANCES
FROM BIZ TO SHOWBIZ
FROM PAGE 1 TO PAGE 3
FROM INDEPENDENT PROFESSIONALS TO INDEPENDENT ARTISTES
FROM FREELANCERS TO FREETHINKERS
IT FLYPS.

About MTV:
MTV, world’s premier youth brand, is a dynamic and a vibrant blend of music and pop culture. With a global reach of more than half-billion households, MTV is a cultural home to the millennial generation, music fans and artists. 32 MM fans following MTV across show pages on social media have made the brand #1 in social influence as well. MTV products are available across 35 unique categories with targeted brand licensing. MTV also has a buzzing MTV Live business with properties like MTV Video Music Awards and MTV Bollyland. Aiming to entertain, lead and collaborate with young people through its evocative communication and youth relevant shows like Roadies, Coke Studio@MTV, MTV Unplugged, MTV Rock the Vote, MTV Kaisi Yeh Yaarian etc. For information about MTV in India, visit http://www.mtvindia.com/

About Viacom18 Consumer Products:
Viacom18 Consumer Products is a significant player in the ever growing consumer products space with its diverse portfolio. Through various associations, Viacom18 has cut beyond the conventional categories giving the consumers a slice of its brands such as MTV, Roadies, Indies, Vh1, Vh1 Supersonic, Nickelodeon, Comedy Central along with a growing portfolio of acquired third party brands.

As a part of the Viacom18 Consumer Products Business, the youth cluster licenses iconic brands like MTV, Roadies, Indies, Vh1, Vh1 Supersonic and Comedy Central to create exciting and engaging products that embody the youthful DNA of each of these brands. The intention is to surround the target consumer through an ecosystem of tangible products outside the channel experience.

About Funbars:
Funbars is the master licensee that conceptualizes, develops, executes and operate India’s one of its kind urban hospitality – that brings together elements of F&B and retail under one versatile and dynamic space that promotes contemporary youth culture. Funbars Hospitality Pvt. is bootstrapped to manifest cafes – powered by MTV of Viacom 18 on floor. The mission of Funbars is to create unique, cohesive F&B concepts and strategies for competitive urban market scenario. The motto of Funbars is to revolutionize the F&B paradigm in developing cities and contribute to the quality of social experience and entertainment in the context of F&B market in the country.