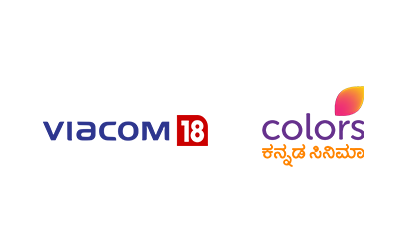 ~The 24-hour movie channel, launching on 24th September, 2018, will enhance the network’s commanding entertainment play in the Kannada market~

~Focused on Regional Market expansion, this is Viacom18’s second regional launch in 2018, after COLORS Tamil ~

Viacom18, India’s fastest growing media and entertainment company, today, announced the launch of its second movie channel – COLORS Kannada Cinema. The network’s foray into movie broadcast space was through Rishtey Cineplex in the year 2016. Hard on the heels of its foray into the Tamil market, the network’s third channel in the lucrative Kannada market, COLORS Kannada Cinema, underlines Viacom18’s aggressive expansion in the growing regional broadcast entertainment space. Equipped with blockbuster movies, the channel will unfold its FPC from 24th September, 2018.

Speaking on the occasion, Sudhanshu Vats, Group CEO, Viacom18 said, “COLORS Kannada Cinema is an important addition to our offering and a first in genre expansion in the Regional space. This demonstrates our strategic commitment to deepen and widen our presence as we drive Regional growth aggressively. This move would help us to increase our market share, both in terms of viewership and revenue, in the country’s 3rd biggest regional market. Finally, as we look to leverage synergies across our brands, COLORS Kannada Cinema complements our portfolio play across our forays into filmed entertainment production and filmed entertainment broadcast.”

Adding to that, Ravish Kumar, Head – Regional Entertainment, Viacom18 said, “At Viacom18, our strategy has always been to make significant inroads to achieve market leadership, especially with our regional portfolio. Movies contribute about 11% of the total television viewership in Karnataka and COLORS Kannada Cinema is launching at the opportune time with the regional cinema industry witnessing an exponential growth in consumption, across screens. While we continue to strengthen our regional bouquet with strategic channel launches in multiple languages, we are also committed to expanding vertically to offer a more segmented and wholesome entertainment to our loyal viewers.”

After Rishtey Cineplex, COLORS Kannada Cinema, a 24-hour movie channel highlights the network’s expansion within the movies broadcast category while reinforcing the network’s objective of strengthening its regional presence. It reaffirms Viacom18’s leadership position in the Kannada space along with its GEC’s – COLORS Kannada and COLORS Super – which currently occupy ~46% viewership share in the Kannada market.

Giving further details about the channel, Parameshwar Gundkal, Business Head – Kannada Entertainment Cluster, Viacom18, “With a robust library of over 450 films, we have strategically curated our movie line-up to appeal to a wide range of audience. Going by the Brand philosophy – Mane Maneya Chitramandira (Har ghar ka theatre) the family entertainment movie channel will usher a fresh in-home cinematic experience for Kannadigas as it celebrates 84 years of the Sandalwood film industry with iconic classics, blockbusters, award-winning and latest films making it a premiere movie destination. The vast library catering to all, encompasses films across genres like romance, action, comedy, mythology, thriller, drama, etc. Backed with strong programming and promotion strategy, the channel will also air unique content around Kannada cinema like behind the scenes, film reviews, interviews and more, thus creating a stronger appeal for movie buffs.”

Be it the latest hits like Gultoo or timeless classics like Gandhada Gudi and Sampattige Saval, COLORS Kannada Cinema is here to create a lasting impression with our viewers. Apart from films, the channel will also have an interesting mix of programmes like; behind the scenes, trivia around the film and a sneak peek into houses of stars giving all the more reason to our loyal patrons to sit back and enjoy a good film with their family.