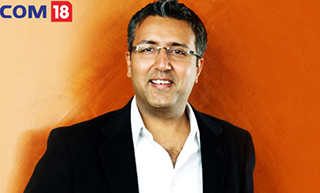 The decision to start a new line of business comes in light of the organization’s strategy to develop a convergent digital media platform for evolved consumers and marketers.

On the announcement of Viacom18 Digital Ventures and the key appointment, Group CEO, Sudhanshu Vats commented, “Broadcast industry is growing rapidly, and digital content, delivery and access are the new green shoots. We are looking to leverage the interception between a highly digital audience and the current content offerings. Gaurav’s rich experience in media, keen understanding of digital, strong base in distribution and his entrepreneurial instinct have made him our obvious choice”.

Says Gaurav Gandhi on the new role, “I am very excited about this opportunity of building out a consumer facing digital business for Viacom 18. With the ever changing media landscape, fast growing high-speed internet access and explosive growth in video consumption across screens, there could not be a better time to move forward in this space. We at Viacom 18 want to be the forefront of this digital convergence with our products & content offerings”