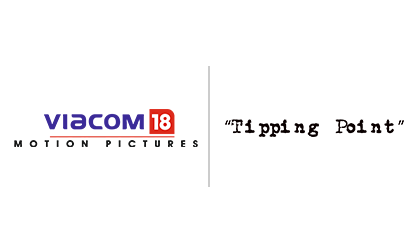 ~To launch a host of web series’, short films and non-traditional formats under the brand~

Commenting on the development, Ajit Andhare, COO, Viacom18 Motion Pictures said, “Having conquered the big screen through unconventional narratives, it is time for Viacom18 Motion Pictures to make its mark in the rapidly emerging digital content space. Tipping Point – our digital content brand will appeal to consumers looking for edgy, contemporary, provocative yet relatable content typically missing in the traditional or mainstream media. Through Tipping Point, Viacom18 Motion Pictures will evolve from being a film studio into a holistic content studio, reaching beyond theatrical offerings into millions of screens on mobile & personal devices with its unique storytelling.”

As a part of the Tipping Point’s offering, the brand has announced collaborations with some of the best from the entertainment industry. The list of soon to be launched web series include – ‘X Ray – Selected Satyajit Shorts’, a 12-part series presentation directed by the National award-winning filmmaker, Srijit Mukherji, an untitled crime thriller created by Imtiaz Ali, ‘Jamtara’ a story about a small district in Jharkhand, known to be India’s phishing capital, directed by Soumendra Padhi and ‘Best Days’, a psychological thriller by Abhishek Sengupta of the web-series Lakhon Mein Ek fame.

Talking about the collaboration, Imtiaz Ali said, “Excited about my foray into digital series – very happy that Window Seat Films and I are working with the team at Viacom18 Motion Pictures. I have lived with this story for a long time and eager to bring it to life now.”

Srijit Mukherji added, “One aspect of Satyajit Ray which probably gets overshadowed by his cinematic genius is his remarkable treasure trove of short stories which an entire generation grew up on. These stories appeared in groups of 12 across years and covered diverse genres like horror, drama, satire etc. It is an honour to get an opportunity to adapt 12 such stories for this web series. We will also relocate the setting of these stories across 12 cities/towns across the country to give them a pan Indian feel.”

Speaking about the association with Viacom18 Motion Pictures, second time around, Soumendra Padhi says, “I am delighted to be associated with Viacom18 Motion Pictures again after Budhia Singh – Born to run, this time for a web series titled Jamtara. The team realizes the power and potential of the digital medium to tell stories which otherwise would never have found the space. Jamtara is a unique story of how a sleepy town in central India becomes the epicenter for all the phishing crimes happening in the country.  And how the influx of this new-found money leads to fault lines between families, relationships, youth and the moral fabric of Jamtara. We look forward to this collaboration in creating new and exciting content together.”

Abhishek Sengupta believes that Tipping Point is the key to giving voice to makers who want to tell unique stories. He said, “Viacom18 Motion Pictures has been at the centre of the content revolution in India. Providing a medium for film makers to say poignant stories that reflect the way modern India views the world. Everyone has been subjected to bullying multiple times in their lives either as a perpetrator or as a victim. But surprisingly little has been said about bullying or how it affects people in the long run. When I was approached to collaborate on Best days of My Life I saw how relevant and important it is and jumped at the opportunity to be able to collaborate with Viacom18 Motion Pictures.”

ABOUT VIACOM18 MOTION PICTURES
Viacom18 Motion Pictures is India’s finest fully integrated motion pictures studio that has emerged as a force to reckon with by delivering a stream of critically and commercially successful films. Offering differentiated and meaningful cinema, some of its iconic releases include Padmaavat (2018), Toilet – Ek Prem Katha (2017), Lucknow Central (2017), Drishyam (2015), Gabbar is Back (2015), Margarita with a Straw (2015), Manjhi – The Mountain Man (2015), Mary Kom (2014), Queen (2014), Bhaag Milkha Bhaag (2013), Madras Café (2013), to name a few. Viacom18 Motion Pictures is also one of the few studios to have successfully ventured into regional films across languages like Bengali, Marathi, Punjabi and from the South. The Studio has also backed path-breaking and much-appreciated creative work in the form of hits like Bombay Talkies, Gangs of Wasseypur I and II, OMG – Oh My God! amongst others.

ABOUT VIACOM18
Viacom18 Media Pvt. Ltd. is one of India’s fastest growing entertainment networks and a house of iconic brands that offers multi-platform, multi-generational and multicultural brand experiences. A joint venture of TV18, which owns 51%, and Viacom Inc., with a 49% stake, Viacom18 defines entertainment in India by touching the lives of people through its properties on air, online, on ground, in shop and through cinema.