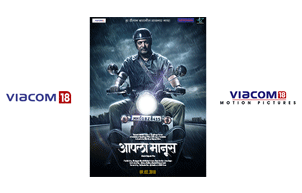 Mumbai, 29th December 2017: Viacom18 today announced its upcoming Marathi film Aapla Manus, the network’s first regional film of the year. Directed by celebrated director Satish Rajwade, this family thriller has Nana Patekar, Sumeet Raghavan & Irawati Harshe in lead roles. The film explores the story of a young couple living with the man’s father, juggling the pressures of urban life and managing the complexity of relationships. An unexpected incident forces them to question their beliefs about their life and family. Aapla Manus marks actor Ajay Devgan’s foray into the regional film sector as a Producer. The film promises to be the one to watch out for in 2018 not only for its stellar cast and gripping narrative but also for the vision of four industry dynamos – Viacom18 Motion Pictures, Ajay Devgn FFilms, Watergate Marathi Motion Pictures & Shree Gajanan Chitra.

Commenting on the upcoming venture, Ajit Andhare, COO, Viacom18 Motion Pictures said, “We have seen enormous audience growth in the Marathi filmscape in the past few years; not just in terms of box office performance but also in terms of the variety of genres. Aapla Manus is a thought provoking film that will move the viewers and question perspectives. As we embark on this journey together with Ajay Devgn FFilms, Watergate Marathi Motion Pictures & Shree Gajanan Chitra, we are certain that the movie will stand out from the clutter. With the goal of strengthening the regional cluster of Viacom18 Motion Pictures, we are confident that this partnership will prove to be a win-win for everyone.”

Speaking on the development and partnership between Ajay Devgn FFilms and Viacom18 Motion Pictures for regional movies, Ajay Devgn said, ”Over the past 25 years of my film career, my relationship with my audience and fans has only become stronger. The support and love I have received over the years has made me always want to give more to my fans. As a producer, Aapla Manus, is my first attempt to showcase my gratitude to the people of Maharashtra and I hope it will get appreciated by all. Our already existing relationship with Viacom18 extends in regional cinema too with this film.”

Speaking about this association, Nikhil Sane, Business Head – Viacom18 Motion Pictures Marathi and Colors Marathi, said, “Marathi cinema has evolved and come a long way especially in the last 5 years. It has made its mark like none other with his innovative storytelling and novel concepts. Aapla Manus will be Viacom18’s first production venture in 2018. With a powerhouse performer like Nana Patekar and a gripping narrative, Aapla Manus will trace the journey of a family dealing with a crisis and a constant threat of something unexpectedly ominous unfolding in their lives. It is a discerning film and I am sure that it will resonate with the audience.”

ABOUT VIACOM18 MOTION PICTURES
Viacom18 Motion Pictures is India’s finest fully integrated motion pictures studio that has emerged as a force to reckon with by delivering a stream of critically and commercially successful films. Offering differentiated and meaningful cinema, some of its iconic releases have been Drishyam (2015), Gabbar is Back (2015), Margarita with a Straw (2015), Manjhi The Mountain Man (2015), Mary Kom (2014), Queen (2014), Bhaag Milkha Bhaag (2013), Madras Café (2013), Special 26 (2013) and Kahaani (2012) to name a few. Viacom18 Motion Pictures is also one of the few studios to have successfully ventured into regional films across languages like Bengali, Marathi, Punjabi and from the South. The Studio has also backed path-breaking and much-appreciated creative work in the form of hits like Bombay Talkies, Gangs of Wasseypur I and II, OMG – Oh My God! Dharam Sankat Main, Manjunath, Shaitan, That Girl in Yellow Boots, Pyaar ka Punchnama and Pyaar Ka Punchnama 2, Inkaar, Saheb, Biwi Aur Gangster Returns, Rahasya and Boss amongst others.
The strategic alliance with Paramount Pictures to market and distribute PPI line-up in the Indian sub-continent has seen blockbusters like Transformers Dark of the Moon, Mission Impossible: Ghost Protocol, Madagascar 3, Hugo, Paranormal Activity, G.I. Joe: Retaliation, Jack Ryan: Shadow Recruit, Noah, Transformers – Age of Extinction, Terminator Genisys and Mission Impossible: Rogue Nation to name a few.

ABOUT VIACOM18
Viacom18 Media Pvt Ltd. is one of India’s fastest growing entertainment networks and a house of iconic brands that offers multi-platform, multi-generational and multicultural brand experiences. A joint venture of Viacom Inc. and the Network18 Group, Viacom18 defines entertainment in India by touching the lives of people through its properties on air, online, on ground, in shop and through cinema.