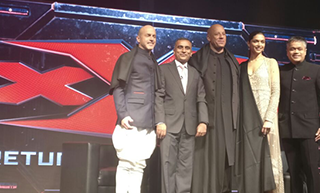 Giving audiences a firsthand experience of the film acclaimed for its extreme sports action – a grand fan event was organized in Mumbai, with a spectacular lineup of entertainment ranging from BMX stunt-bikers to skateboarders and B- Boying troupes. Nucleya further took the stage and kept the fans in a trance up until Vin Diesel and Deepika Padukone made their entrance to greet the fans. Following the incredible fan experience, Vin Diesel, Deepika Padukone and DJ Caruso walked down the red carpet, signing autographs and interacting with their fans at the premiere.

Present at the premiere Sudhanshu Vats, Group CEO, Viacom18 mentioned, “Viacom18 Motion Pictures, has long been associated with producing content driven movies, often with female leads. Today, we are at an event that captures the spirit of universal stories – bringing global stories to India and taking Indian stories global. The India Hollywood connection has evolved through three stages. We started the journey by taking India’s pain and evolution through movies like Gandhi and A Passage to India. That stage followed with our stars who went on to essay character roles. In the last 3-4 years we have seen the emergence of stories from here like The Life of Pi and Jungle Book. Today’s a landmark moment when a leading lady from our country is playing a lead role in a mainstream Hollywood movie. It is our privilege to start this with bringing Deepika’s first Hollywood film to India. It is inspirational to see how far we have come in influencing Hollywood productions-through actors, storylines, locations, philosophies through the years. It gives us immense pride that our studio has brought this movie to India and will soon bring Baywatch with Priyanka Chopra as well.”

About Viacom18
Viacom 18 Media Pvt. Ltd. is one of India’s fastest growing entertainment networks and a house of iconic brands that offers multi-platform, multi-generational and multicultural brand experiences. A 50:50 joint venture of Viacom Inc. and the Network18 Group, Viacom18 defines entertainment in India by connecting with people on air, online, on ground, in shop and through its cinema.

About Viacom18 Motion Pictures
Viacom18 Motion Pictures is India’s finest fully integrated motion pictures studio that has emerged as a force to reckon with by delivering a stream of critically and commercially successful films. Offering differentiated and meaningful cinema, some of its iconic releases have been Drishyam (2015), Gabbar is Back (2015), Margarita with a Straw (2015), Manjhi The Mountain Man (2015), Mary Kom (2014), Queen (2014), Bhaag Milkha Bhaag (2013), Madras Café (2013), Special 26 (2013) and Kahaani (2012) to name a few. Viacom18 Motion Pictures is also one of the few studios to have successfully ventured into regional films across languages like Bengali, Marathi, Punjabi and from the South. The Studio has also backed path-breaking and much-appreciated creative work in the form of hits like Bombay Talkies, Gangs of Wasseypur I and II, OMG – Oh My God!, Dharam Sankat Main, Manjunath, Shaitan, That Girl in Yellow Boots, Pyaar ka Punchnama and Pyaar Ka Punchnama 2, Inkaar, Saheb, Biwi Aur Gangster Returns, Rahasya and Boss amongst others.