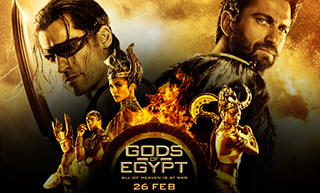 Mumbai: Viacom18 Motion Pictures has been setting new benchmarks at the Indian Box Office with the success of franchises like Mission Impossible, Terminator and Transformers – Age of Extinction. The studio now aims to further expatiate its Hollywood slate with the marketing and distribution of Gods of Egypt, from Lionsgate’s Summit Entertainment label in India, slated for release on February 26, 2016.

This fantasy film recreates the ancient Egyptian kingdom depicting armor clad, sword swinging Gerard Butler as the Egyptian God of Darkness Set and Brendon Thwaites as mortal hero Bek. This mega action adventure follows Bek’s quest to retrieve magic objects with thrilling chase sequences followed by breathtaking high octane action scenes for the survival of mankind that is hanging in the balance. The film will be released in English, Hindi, Tamil and Telugu.

Commenting on the same, Ajit Andhare – COO, Viacom18 Motion Pictures said, “We are delighted to collaborate with Lionsgate on Gods of Egypt. We have been keen to expand our English film slate with the growing Hollywood contribution to the Indian Box Office. Film viewers who appreciate scale and larger than life canvases of Hollywood films are going to love this film.”

Also commenting, Wendy Reeds, Executive Vice President, International Sales for Lionsgate’s Motion Picture Group, said, “Viacom18 is a terrific partner with a wonderful track record of marketing and distributing popular action films and we are very pleased to be working with them on the local release of Gods of Egypt. This is the type of big-action film that audiences will want to see in the theater.”
The deal was negotiated by Wendy Reeds and Christian Perala in Lionsgate International’s UK office.  Gods of Egypt is slated for release on February 26, 2016 in India.

About Viacom18 Motion Pictures
Viacom18 Motion Pictures is India’s finest fully integrated motion pictures studio that has emerged as a force to reckon with by delivering a stream of critically and commercially successful films. Offering differentiated and meaningful cinema, some of its iconic releases have been Drishyam (2015), Gabbar is Back (2015), Margarita with a Straw (2015), Manjhi The Mountain Man (2015), Mary Kom (2014), Queen (2014), Bhaag Milkha Bhaag (2013), Madras Café (2013), Special 26 (2013) and Kahaani (2012) to name a few. Viacom18 Motion Pictures is also one of the few studios to have successfully ventured into regional films across languages like Bengali, Marathi, Punjabi and from the South. The Studio has also backed path-breaking and much-appreciated creative work in the form of hits like Bombay Talkies, Gangs of Wasseypur I and II, OMG – Oh My God!, Dharam Sankat Main, Manjunath, Shaitan, That Girl in Yellow Boots, Pyaar ka Punchnama and Pyaar Ka Punchnama 2, Inkaar, Saheb, Biwi Aur Gangster Returns, Rahasya and Boss amongst others.
The strategic alliance with Paramount Pictures to market and distribute PPI line-up in the Indian sub-continent has seen blockbusters like Transformers Dark of the Moon, Mission Impossible: Ghost Protocol, Madagascar 3, Hugo, Paranormal Activity, G.I. Joe: Retaliation, Jack Ryan: Shadow Recruit, Noah, Transformers – Age of Extinction, Terminator Genisys and Mission Impossible : Rogue Nation to name a few.