Media
Viacom18 partners with Film Heritage Foundation for the 2nd time in a row; aims to safeguard and preserve India’s film heritage 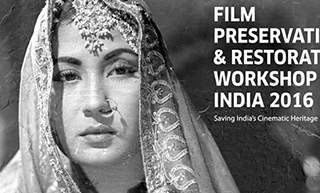 Mumbai/Pune, February, 23rd, 2016: After having accomplished a successful inaugural edition of an academic initiative focused on film preservation and restoration in partnership with Film Heritage Foundation, (FHF) Viacom18 has joined hands with FHF for the 2nd time in a row with an aim to save and uphold the legacy of India’s cinematic heritage. The workshop titled ‘Film Preservation & Restoration Workshop India 2016’will take place from February 26th to March 6th in Pune and will involve lectures, presentations and practical classes that will be conducted by leading international experts in the field. The workshop will be inaugurated by none other than veteran actor Naseeruddin Shah in the presence of Sunil Arora – Secretary of the Ministry of Information and Broadcasting, Sudhanshu Vats – Group CEO Viacom18 Media Pvt. Ltd., Shivendra Singh Dungarpur – Founder Director of Film Heritage Foundation and Prakash Magdum – Director of National Film Archive of India.

Recognizing the urgent need to preserve India’s rich filmic legacy, this initiative is a much needed effort which was conceptualized by acclaimed filmmaker and archivist; Shivendra Singh Dungarpur and further associated and collaborated by Viacom18. Being a media conglomerate and a content creator, Viacom18 understands the need to preserve content created currently for the generations to come. While last year the workshops were held to create awareness about film conservation, the main evolution this year is for the first time bringing to Indian Cinema the level of expertise and access to information that is required to help the cause of film preservation at large.

Extending support to this unique initiative, Sudhanshu Vats, Group CEO Viacom18 Media Pvt. Ltd said, “We strongly believe that every enterprise has to be global and social at the same time. At Viacom18, we know for a fact that India is a country of storytellers; in fact the largest and oldest stories in the world come from here. And so we realize how important it is to preserve our cultural heritage for the benefit of the future generations. After a successful inaugural year, we have partnered with Film Heritage Foundation for the 2nd year and aim to create awareness about the necessity and importance of safeguarding what is ours! We look forward to educate and interact with cinema enthusiasts during the course of the Film preservation and restoration workshop 2016.”

Shivendra Singh Dungarpur, Founder Director, Film Heritage Foundation said, “After receiving a great response in the first year itself, we are back again with a longer, more advanced and intensive Film Preservation and Restoration Workshop for all those who understand the importance of the rich cinematic legacy of India and who wish to learn, explore and contribute and contribute to saving our film heritage. FHF would like to thank Sudhanshu Vats, Group CEO of Viacom 18 for being one of the first people from the media and film industry to have the vision to recognize the importance of our cause and for Viacom’s unstinting support that has made it possible for us to conduct the workshop for two consecutive years.

With a committee of panelists including some of the most influential names from the industry from across the globe, this year the workshop will give practical training to help make abled archivists, which is a dire need for cinema in India. This also opens up a career alternative for film students of many acclaimed universities across India, allowing them to learn more in-depth knowledge on this topic. The unique part of this initiative is that it not only helps preserve all language films of the Indian film industry but also will help understand the preservation of non-film material.

With a mix of technical workshops on the craft of preservation and lectures specially designed by David Walsh, Head of the FIAF Technical Commission, there will also be a daily screening of a great Indian classic.

Extending his support to the initiative, Veteran Actor Naseeruddin Shah said “When Shivendra called me and requested me to be the Chief Guest at the opening ceremony of the Film Preservation & Restoration Workshop India 2016, I was very happy to accept. There has been a growing awareness about how much of our cinematic legacy has been lost over the years for various reasons and the urgent need to preserve what is left of it. I think it’s great that Film Heritage Foundation and National Film Archive of India have come together with FIAF to conduct this important workshop to train people in the highly specialized field of film archiving which is essential if we are to save our cinematic heritage.”

National Film Archive of India (NFAI), Film Heritage Foundation and the International Federation of Film Archives (FIAF) have come together to conduct the Film Preservation & Restoration Workshop India 2016 to provide training in film preservation and restoration to help safeguard India’s cinematic heritage. The goal of the programme is not only to augment the infrastructure and capacity of the NFAI but also to build an indigenous resource of film archivists and restorers who can work towards saving India’s cinematic heritage in the future.

ABOUT VIACOM18 MEDIA PVT. LTD.:
Viacom 18 Media Pvt. Ltd. is one of India’s fastest growing entertainment networks and a house of iconic brands that offers multi-platform, multi-generational and multicultural brand experiences. A joint venture of Viacom Inc. and the Network18 Group, Viacom18 defines entertainment in India by touching people on-air, online, on ground, in shop and through its cinema.

ABOUT FILM HERITAGE FOUNDATION:
Film Heritage Foundation is a not-for-profit organization based in Mumbai set up by Shivendra Singh Dungarpur. Recognizing the urgent need to preserve India’s cinematic heritage, Film Heritage Foundation is dedicated to supporting the conservation, preservation and restoration of the moving image and to develop interdisciplinary educational programs that will use film as an educational tool and create awareness about the language of cinema.