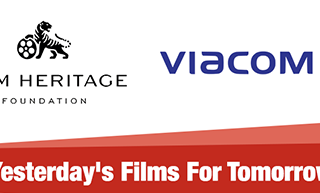 The Film Preservation & Restoration Workshop India 2017 aims to train an indigenous pool of film archivists and restorers as well as to create awareness about the urgent need to save India’s cinematic heritage. With previous editions being held in Mumbai and Pune, this year the workshop hopes to not just awaken the South Indian film industry to this urgent issue but to build on the movement that has been created all over India as well as in our neighboring countries.

“At the heart of it, civilization is a chronicle of stories across generations. As India’s foremost storytellers we connect deeply with this ethos and our support to Film Heritage Foundation is a confluence of this shared belief. India’s culture and heritage is captured creatively and reflected through our films and these, therefore, become historical artefacts representative of the times they were created in. It is pertinent that this content is preserved for reference as well as archived for perusal by future generations”, said Sudhanshu Vats, Group CEO, Viacom18.

Founder Director of Film Heritage Foundation, Shivendra Singh Dungarpur said, “Film Heritage Foundation is committed to preserve the film heritage of India across various genres and languages. Bringing the workshop to Chennai this year, our aim is to create awareness about the urgent need to preserve India’s film heritage including the rich regional film heritage of the South Indian film industry. The program this year is further strengthened with support of Viacom18 and enriched by partnering with The International Federation of Film Archives (FIAF), The Film Foundation’s World Cinema Project, L’Immagine Ritrovata, The Academy of Motion Picture Arts & Sciences, Prasad Corp., La Cinémathèque française, Imperial War Museums, Fondazione Cineteca di Bologna, the Finnish Film Archive and the Czech National Film Archive and The Criterion Collection.”

Open to applicants from India, Sri Lanka, Nepal, Bhutan and Bangladesh, the Film Preservation & Restoration Workshop India 2017 will extensively focus on repairing damaged and decayed celluloid film, restore and preserve film posters, lobby cards, song booklets and photographs, techniques of digital preservation and restoration, etc. There are several scholarships available for deserving candidates along with job opportunities at FHF on successful completion of the course.

Speaking about the workshop, legendary film actor and producer Kamal Haasan said, “I am very happy and proud to know that the Film Heritage Foundation has decided to come to Chennai to run a workshop on film archiving. I’ve seen them do it once in Pune. There were about 50 students and I was moved really. The film industry should come forward to conserve, save and keep our film heritage intact. And this very important workshop is going to teach future archivists how to go about preserving film. It’s a very important workshop for those interested in cinema itself, cinema not only of today but of yesterday.”

Eminent experts from across the globe such as David Walsh FIAF’s Head of Training and Outreach, Camille Blot-Wellens from FIAF, Tina Kelly from Imperial War Museum, Dawn Jaros from The Academy of Motion Picture, Arts & Sciences, Emilie Cauquy from La Cinémathèque française and Marianna De Sanctis from L’Immagine Ritrovata, Bologna amongst others will comprise the faculty of the workshop.

Applications are open for The Film Preservation & Restoration Workshop India 2017 on www.filmheritagefoundation.co.in or www.fiafnet.org. The workshop will take place from October 7th-14th, 2017 in Chennai.

About Viacom18:
Viacom 18 Media Pvt. Ltd. is one of India’s fastest growing entertainment networks and a house of iconic brands that offers multi-platform, multi-generational and multicultural brand experiences. A 50:50 joint venture of Viacom Inc. and the Network18 Group, Viacom18 defines entertainment in India by touching people on air, online, on ground, in shop and through its cinema.