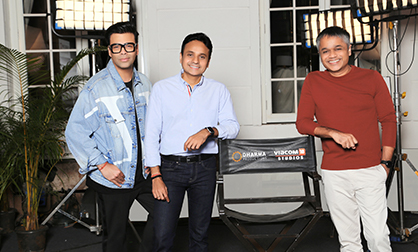 Mumbai, 22nd September, 2021: Viacom18 Studios has created a penchant for its unique brand of cinema by creating some of India’s genre defining films, garnering astounding commercial success and critical acclaim for the studio. Now in its next endeavour, Viacom18 Studios is collaborating with one of India’s top production house – Dharma Productions to bring forth the best actors and directors to the big screen with the most awaited Hindi films.

Speaking about the partnership, Ajit Andhare, COO, Viacom18 Studios, said: “As Viacom18 Studios scales up and begins a new chapter, we are looking at key partnerships with creators who shape mainstream entertainment. Collaborating to build a slate of films further strengthens our long-term association with Karan and Dharma Productions.”

Karan Johar added, “In Viacom18 Studios and Ajit, we have a partner who not only shares our vision in storytelling but also has our approach to differentiated cinema. Dharma Productions has been committed to entertaining movie-goers world over with every film and this partnership will further enable it.”

Apoorva Mehta, CEO, Dharma Productions said, “The partnership with Viacom18 Studios is a significant step for Dharma as together we gear up to bring back the best of Hindi cinema to theatrical audiences. We believe that strategic alliances are the way forward for the film industry and this partnership is the stepping-stone to a long-term alliance.”

The films which are part of this deal are in various stages of production and are expected to release over the next 18- 24 months. With Viacom18’s leading broadcast channels at play, the network has also acquired satellite rights for these films.

Viacom18 Studios is India’s finest fully integrated motion pictures studio that has emerged as a force to reckon with by delivering a stream of critically and commercially successful films. Offering differentiated and meaningful cinema, some of its iconic releases include Andhadhun (2018), Padmaavat (2018), Toilet– Ek Prem Katha (2017), Lucknow Central (2017), Drishyam (2015), Gabbar is Back (2015), Margarita with a Straw (2015), Manjhi – The Mountain Man (2015), Mary Kom (2014), Queen (2014), Bhaag Milkha Bhaag (2013), Madras Café (2013), to name a few. Viacom18 Studios is also one of the few studios to have successfully ventured into regional films across languages like Bengali, Marathi, Punjabi and from the South. The Studio has also backed path-breaking and much-appreciated creative work in the form of hits like Bombay Talkies, Gangs of Wasseypur I and II, OMG – Oh My God! amongst others.

Under the Viacom18 Studios umbrella, Tipping Point – a young digital content brand, creates cutting-edge content for the digital medium. Tipping Point has already made a mark in the universe of OTT content with shows such as Jamtara, She, Taj Mahal 1989 and Ray.

Dharma Productions is a leading Indian film production and distribution company. Owned by Karan Johar, the company was founded by his father Late Sri Yash Johar in 1976, with its first production venture titled ‘Dostana’ starring Amitabh Bachchan. Since Karan Johar’s directorial debut film ‘Kuch Kuch Hota Hai’, the company has gone on to produce more than 45+ films which includes series of blockbusters and critically acclaimed films like “Kabhi Khushi Kabhie Gham, My Name is Khan, Yeh Jawaani Hai Deewani, Agneepath, The Lunchbox, Baahubali, Raazi, Kesari and Shershaah. In its recent past, Dharma Productions has earned a name in the industry for launching a fresh talent pool of directors, together with rising stars such as Alia Bhatt, Sidharth Malhotra, Varun Dhawan, Janhvi Kapoor, Tara Sutaria & Ananya Panday. Today, Dharma Productions is the most sought-after production house in the country, and is constantly aiming at creating new benchmarks in the Indian film industry.