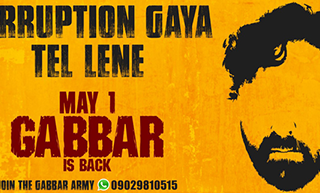 March 17, 2014: In a first-of-its-kind teaser initiative in the Indian film industry, Viacom18 Motion Pictures launched a massive campaign for its upcoming action thriller ‘Gabbar is Back’. The initiative makes a daring new announcement – Bad is the New Good. Touching a phenomenal 1 Million touch points across 15 cities pan India, this 360 degree promotional drive was targeted at a grass root level in an attempt to effectively reach out to the aam junta.

Viacom18 Motion Pictures and Sanjay Leela Bhansali reunite for this multi-starrer film with action maestro ─ Akshay Kumar in the lead. Fighting for a cause, Gabbar – an aam aadmi himself – believes in standing up for what is right and is seen battling various grass root level corruption in his unique albeit brutal manner. With larger than life action sequences and a gripping storyline, the film will witness Akshay Kumar in a never seen before avatar.

Talking about this mammoth activation, Rudrarup Datta – VP, Marketing – Viacom18 Motion Pictures said, “The name Gabbar strikes the fear of the original Gabbar Singh and with this campaign, we have created witty hoardings, motion posters and other branding elements that warns one against corruption. The objective was to engage with the real junta at the grassroot level. As the film is an entertainer with a message, our campaign reflects the same.”

Driving synergies with the film, the marketing teaser campaign for Gabbar is Back revolves around the aam aadmi and his uncommon problems with rampant corruption all around. Each branding element was customised for this campaign integrated with the original Gabbar Singh dialogues. For example, on a chai cup or poster – the messaging reads as – Chai Piyo, Chai Paani Nahi or on a poster in a pan stall, the copy reads – Rishwat Ka Chuna Khaaya, AB Goli Kha.

On-ground: The Gabbar poster was inserted in 50,000 Dabbas with about 3500 Dabbawalas sporting the Gabbar mnemonic T shirts. 10,000 Rickshaws across 21 cities, 370 buses covering Maharashtra, 15 Hoardings across the Delhi metro line, 10 Hoardings across the Mumbai Metro, 150 Platform Hoardings across Mumbai railway stations, 2 Local Trains with branding one on the Western Line and One on the Central, 35 Hoardings on petrol Pumps across Mumbai and Ahmedabad and 4500 Meru Cabs across 4 Cities were branded with witty Gabbar creatives that warned all against corruption. Moreover, 8Lakh Branded Gabbar teacups were distributed with 14000 Danglers and 7000 Posters across 3000 Tea Stalls and 4000 pan Stalls across 13 Cities.  Furthermore, GABBAR branded tags were inserted on LPG cylinders going to 1,00,000 households in Mumbai and anti-piracy posters were installed in 2000 entertainment retail stores across 3 cities.

Radio: A Strategic tie up wherein the teaser posters were distributed at chai stalls and pan tapris at 5oo outlets across 17 cities where their channel plays.

Digital: Reaching out to a vast fan base, the campaign has already garnered 6790 Facebook likes, 1611 Twitter followers, and 10574 Instagram followers in a matter of just a few days. Four different motion teaser videos were launched on four leading film trade portals with exclusive tie-ups for each of the videos. The first teaser alone garnered over 5 lakh views on day 1.

The hashtag #GabbarTeaser trended on Twitter India for five hours, reaching 7.5 Mn+ users. The hashtag #GabbarIsBack reached out to 9.3 Mn+ users even before the launch of official properties. Memes that were both witty and topical were created and floated across social media and Whatsapp.

Gabbar is Back promises heavy substance with heavy entertainment. Shruti Hassan, Sunil Grover and Suman Talwar essay pivotal roles in this movie along with a special guest appearance by Kareena Kapoor Khan. Gabbar is Back releases on May 1, 2015.

Viacom18 Motion Pictures is India’s finest fully integrated motion pictures studio that has emerged as a force to reckon with by delivering a stream of critically and commercially successful films. Offering differentiated and meaningful cinema, some of its iconic releases have been Queen (2014), Bhaag Milkha Bhaag (2013), Madras Café (2013), Special 26 (2013) and Kahaani (2012) to name a few. Viacom18 Motion Pictures is also one of the few studios to have successfully ventured into regional films across languages like Bengali, Marathi, Punjabi and from the South. The Studio has also backed path-breaking and much-appreciated creative work in the form of hits like Bombay Talkies, Gangs of Wasseypur I and II, OMG – Oh My God!, Manjunath, Shaitan, That Girl in Yellow Boots, Pyaar ka Punchnama, Inkaar, Saheb, Biwi Aur Gangster Returns and  Boss amongst others.