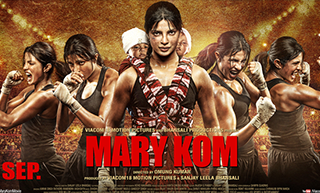 Mumbai: After its win for ‘Bhaag Milkhaa Bhaag’ last year that was adjudged as the ‘Best Popular Film providing Wholesome Entertainment’, Mary Kom this year has taken the same legacy forward for Viacom18 Motion Pictures. A feat that one would never predict for a female centric film – Mary Kom packed a punch with its record breaking 30Cr opening weekend collection.

Queen made a silent start and like all long distance runners, gained pace as it refused to budge from the cinema halls week after week – eventually crossing the 100 Cr mark globally with rave reviews that brought in audiences from every part of the world. This year, two strong scripts, viewed from the eyes of two equally gutsy female characters wins big at the National Awards.

Elaborating on the same, Ajit Andhare – COO, Viacom18 Motion said, “Mary Kom winning as the most popular film providing wholesome entertainment for us on the back of Bhaag Milkha Bhaag’s win last year in the same category is the best tribute we could get for the kind of cinema we stand for. My congratulations to Sanjay, Omung, Priyanka, Darshan, Mary herself and the entire film and studio team for this achievement. This is Mary Kom’s brightest medallion.”

Viacom18 Motion Pictures, the studio that has given Indian cinema some of its most celebrated films also cinches the ‘Best Hindi Film’ award for Queen, yet again proving the mettle of great narratives and powerful characters. Kangana as Rani brought to life the journey of a simple girl from Rajori, Delhi going for a solo honeymoon and won the award for Best Actress.

Talking about the awards for Queen, Ajit Andhare said, “National award for Queen as Best Hindi Film is a celebration of our own coming of age as a society. The Queen fittingly has found her Crown in the National Award. It is a wonderful moment in Indian cinema.”

Viacom18 Motion Pictures is India’s finest fully integrated motion pictures studio that has emerged as a force to reckon with by delivering a stream of critically and commercially successful films. Offering differentiated and meaningful cinema, some of its iconic releases have been Queen (2014), Bhaag Milkha Bhaag (2013), Madras Café (2013), Special 26 (2013) and Kahaani (2012) to name a few. Viacom18 Motion Pictures is also one of the few studios to have successfully ventured into regional films across languages like Bengali, Marathi, Punjabi and from the South. The Studio has also backed path-breaking and much-appreciated creative work in the form of hits like Bombay Talkies, Gangs of Wasseypur I and II, OMG – Oh My God!, Manjunath, Shaitan, That Girl in Yellow Boots, Pyaar ka Punchnama, Inkaar, Saheb, Biwi Aur Gangster Returns and  Boss amongst others.