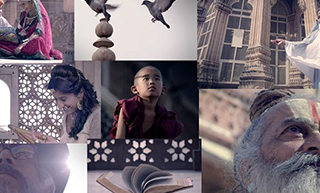 World War 1, World War 2, Apartheid, 9/11, Mumbai Blasts, the Paris Attacks, Pathankot Attack – after all, peace is a subject which needs to be reinforced into the world constantly and consistently…

Mumbai, January 21, 2016: The dove, or Kabootar as it is called in Hindi, has been symbolic with peace and its synonymy will preach the message of harmony this 26th January. On the occasion of India’s 67th Republic Day, COLORS, in association with Equal Rights Music, will spread a message of goodwill and amity with the launch of Kabootar – A Peace Anthem. The song will be launched on COLORS’ digital and social media platforms reaching out to over 13 million followers and subscribers on 26th January, 2016.

Speaking about this initiative, Raj Nayak, CEO – COLORS says, “As a brand, COLORS has always showcased the different hues of human emotions, feelings and sentiments. However, as we drive global development to accomplish personal goals and ambitions, peace is something that the world has lost touch with. As a nation, India has always led the fight for global harmony and brotherhood, making the country’s 67th Republic Day the perfect launchpad for ‘Kabootar – A Peace Anthem’. We are happy to have partnered with the Equal Rights Music Project for this initiative and hope that it unites the nation to achieve peace.”

Conceptualized and written by Manish Bhatt – Founder Director, Scarecrow Communications and composed by Eddie T Avil, the song uses Kabootar as a metaphor for peace. The song’s insightfully written lyrics asks the dove the one question that mankind has been eternally pondering over – ‘When Will Peace Finally Grace the World / Kab utrega dharti par, ein kabootar’. The video, aesthetically shot by Riju Samanta, also symbolizes the cause and is a nostalgic reminder of the diversity and similarities we share as Indians. The song and the video builds upon the fact that we really don’t care about the minor differences we have, but the one thing we genuinely care about, is to ensure harmony and peace for our coming generations.

Lyricist Manish Bhatt says that, “As French President Francois Hollande is our Chief Guest on this auspicious occasion of Indian Republic Day. Via ‘Kabootar’- the song, I would like to convey to everyone on this planet that NOT JUST PARIS OR PATHANKOT, BUT THE ENTIRE WORLD NEEDS PEACE. And it’s high time we act on it.”

Composer Eddie T Avil adds, “Music has no boundaries, it works beyond the paradigm of languages and is understood by everyone. So what better way to convey a message that has to cross all borders than music? I dream of a world where everybody is equal, a world without war, poverty and terrorism and it was an honour to have been part of an important world message through music.”

While the music has been soulfully composed by Eddi T Avil, the screenplay has been intricately visualized by Manish Bhatt and Lalit Sakurkar and directed by Beeswaranjan Pradhan. Jigardan Gadhvi and Kunal Bhadra have lent their enthralling voices to the peace anthem while the instruments have been played by a talented group of men – Omkar Patil (Harmonium), Vijay Jadhav (Tabla/Dholak), Vaibhav Panch (Bass Guitar) and Tapas Ray (Mandolin/Oud /Saz), with the sound being engineered by Kunal Dabholkar.

ABOUT VIACOM18
Viacom 18 Media Pvt. Ltd. is one of India’s fastest growing entertainment networks and a house of iconic brands that offers multi-platform, multi-generational and multicultural brand experiences. A joint venture of Viacom Inc. and the Network18 Group, Viacom18 defines entertainment in India by touching people onair, online, on ground, in shop and through its cinema.

About Equal Rights Music Project
Kabootar is the first project created under the Equal Rights Project. A concept pioneered by Manish Bhatt and Eddie T Avil, Equal Rights Music Project is a music platform where professionals from across the music industry can come together to create original work. All rights of the produced piece are equally divided amongst all contributors of the project, from the composer, singer, lyricist, sound engineer to even instrument player.