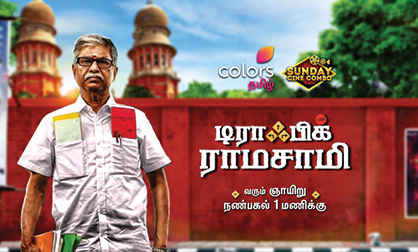 Tune in to Colors Tamil this Sunday 4th July, at 1 PM and 4:30 PM, to watch these exciting movies

Chennai 1st July 2021: Colors Tamil, the youngest GEC of Tamil Nadu, has been entertaining film buffs with back to back movies every weekend. To take it to the next level, the channel is set to bring to your screens the world television premiere of Traffic Ramaswamy, starring actor/director S.A. Chandrasekhar.

Along with this intriguing biopic, the channel will also telecast a timeless entertainer, Ellame En Rasathan, starring actor Rajkiran, as part of its Sunday Cine Combo. Tune in to Colors Tamil this Sunday, 4th July, at 1:00 PM and 4:30 PM to catch these two blockbuster hits.

Traffic Ramaswamy is an inspiring  2018 movie based on real-life social activist Mr. Traffic Ramaswamy. Directed by noted director Vicky, the film features S.A. Chandrasekhar in a pivotal role, alongside renowned actors like Makkal Selvan Vijay Sethupathi, Prakash Raj, Rohini, Livingston, Ambika, Vijay Antony, Khushbu Sundar, Seeman and Kasthuri. The film trails the journey of Traffic Ramaswamy and his revolutionary actions taken to resolve corruption in the state through petitions and protests. The story also highlights the eternal struggle that he faced to bring substantial changes in society. 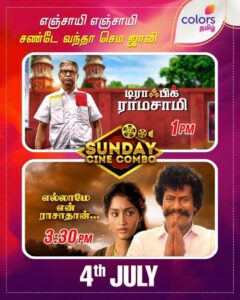 Ellame En Rasathan is a 1995 drama film directed and played by veteran actor/director Rajkiran alongside popular actors Sangita and Roopa Sree. The film traces the life of Singarasu (played by Rajkiran), who along with his daughter, travels to a secluded village to avenge his wife’s murder. Singarasu also works on a plan to punish the murderer, and what transpires later constitutes the crux of the narrative. That’s not all, the film’s music is composed by celebrated music director Ilayaraaja featuring one of the popular songs of the era – Vadivelu’s ‘Ettana Iruntha‘, making it all the more entertaining for the viewers.

About COLORS Tamil: Launched in February 2018, COLORS Tamil is the youngest general entertainment channel from the stable of Viacom18 that thrives to entertain the Tamil speaking viewers around the globe through distinctive and powerful stories that inspire and celebrate women and their families. Positioned as IdhuNammaOruColoru (the colors of our motherland), COLORS Tamil focuses on storytelling that matches the rich heritage of the Tamil Nadu culture with qualitative and innovative programming. Some of our flagship shows are Velunachi, Arya’s EngaVeetuMaapilai, Dance Vs Dance, COLORS Comedy Nights, Singing Stars, Oviya, VandhalSridevi, Perazhagi, Thirumanam, Thari, Malar, Kalla Petti, Kodeeswari, Uyire, Amman, IdhayathaiThirudathey, MangalyaSandhosham& Colors Kitchen amongst others.

About Viacom18:  Viacom18 Media Pvt. Ltd. is one of India’s fastest growing entertainment networks and a house of iconic brands that offers multi-platform, multi-generational and multicultural brand experiences. A joint venture of Network18, which owns 51%, and ViacomCBS, with a 49% stake,Viacom18 defines entertainment in India by touching the lives of people through its properties on air, online, on ground, in shop and through cinema.